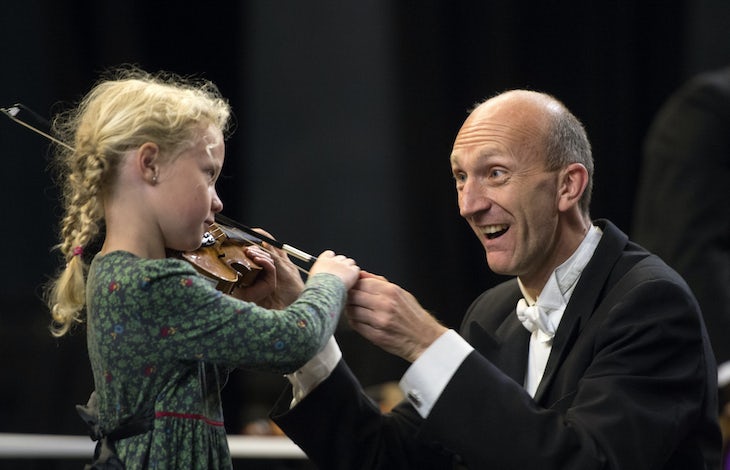 Projection of symphonic music and our cultural heritage to children and the youth is an integral part of our mission. A total of 39 concerts in 2017 aimed at children and youth reaching a total of 18 350.

«The Talent Search» is a project with the talent development program by Equinor called “Morgendagens Helter” (the Heros of Tomorrow), where talented your is selected after a test play. They will get the opportunity to play at four orchestra productions through the concert season under close supervision by musicians at the SSO. They will by this have the chance to see how is is to play as a professional musician at an orchestra.

The talents from the 2017/2018 season is four youths, two from Stavanger, one from Lura in Sandnes and one from Haugesund. A total of 31 talented youths have played with the SSO through the Talent Search. Ms. Christine Oseland participated as a talent in the 2012/2013 season and was hired permanently as a viola in 2017. Many of the previous talents have been hired permanently in professional orchestras or are used as freelance musicians.

A project aimed at youth that was started in 2013 together with the talent development program by Equinor called “Morgendagens Helter” (the Heros of Tomorrow). It’s called LYDO and it combines science with music. The concert project is aimed at 5th to 10th graders in school. In 2017 musician and TV-host Per Kristian Grytdal or PF hosted the show. He showed students, researchers and business leaders a rare and interesting projection of the correlation in-between music and science. In 2018 the topics were music, mathematics and coding with Håvard Tjora as the host. In 2019 LYDO will look at the similarities in-between music and mathematics with researcher Sunniva Rose.

Each year Stavanger Symfoniorkester is inviting to separate school- and kindergarten concerts in Rogaland. We are travelling around the region to meet children and young people in their locality. Our Education and Outreach Coordinator Ingvild Rosenberg facilitates the concert so the young ones think it is joyful and interesting to participate at large musical event and experience the magic.

Most of us have a relation to movie- and gaming music even if we are not regulars at Fartein Valen. Each season we are having concerts with movie music and gaming music as the topic. In January 2018 we had a play concert where many in the audience had their first interaction with the Stavanger Symfoniorkester.

Do you want to know more?

If you want to know which four instrument groups an orchestra consists of? Or how frequently the musicians reverse and what a pauke is? Do you want to visit us at Stavanger Concert Hall or do you want us to visit your kindergarten or school? Please contact our Education and Outreach Coordinator Ingvild Rosenberg by e-mail or at (+47) 41635667.